The Wakeful Wanderer‘s Guide to New New England & Beyond 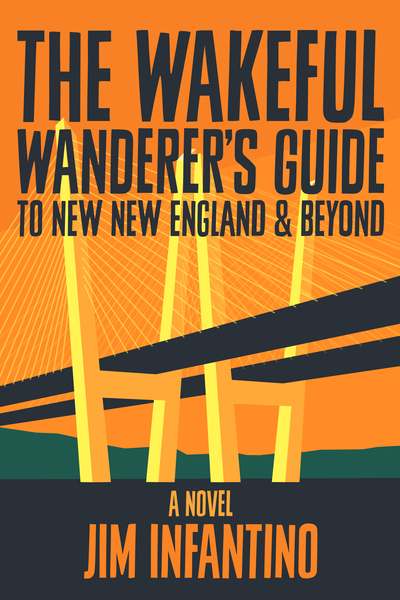 In the parlor of the Lester Sunshine Inn, up the Hudson River from the flooded remains of lower Manhattan, a young man named Marto plans a unicycle ride through scenic New New England.

Marto is a traveling historian with a head full of implants. He live-posts his experiences to his interconnected fans, adding his own commentary to the mix. Marto has become a curiosity among his peers. His armchair followers rarely go anywhere, preferring to experience the world remotely. Before he can go on tour, a mysterious woman named Helen arrives with information that causes Marto to question his identity.

The Interconnected live a life of relative ease in a climate-changed world. They have eschewed ownership, family, and money in favor of a social economy based on generosity and access. They are in perpetual contact with each other via their neural implants, sharing ideas, gifts, and games.

The Traditionalists who choose not to adapt to the post-human ways of the Interconnected fear them and call them Xombies. They long for the glory days of markets and laws and are committed to steering humanity back toward a way of life they can believe in.

This darkly humorous reflection of our changing world is an exploration of what it means to be human as our relationships with technology become increasingly intimate.

You’d think the strip of land that marks the crossover between the countries of songwriting and novel writing would be more fertile, wouldn't you? But the list of songwriters who have penned books, while pretty long, is not very distinguished.

Mostly when a songwriter pens a book it will be poetry, which always feels to me like a dumping ground for song lyrics that they just couldn't get to scan quite right and so they called them poems and hoped nobody would notice (although, yes, I do own an autographed copy of Harry Chapin’s poetry book, don’t judge me). If not poetry, the songwriting author usually attempts a great literary novel in which words run away from them like unherdable cats frolicking madly when they find themselves freed of the constraints of scansion - yes, Morrissey, I’m looking at you. We’re all looking at you, Morrissey.

Songwriter memoirs are more reliably readable, because even the most poorly written normally contain a few good anecdotes that justify the price of admission, and the best of them, like Bruce Springsteen’s and Keith Richards’, are little masterpieces.

But a songwriter writing a genre book? I can think of only one - The Decemberists’ Colin Meloy, and while his fantasy books are really pretty good, they also crossover with the subgenre of songwriters writing for children which includes Madonna and Courtney Love, and nobody wants to be in that club.

Novelists writing song lyrics then? I can think of David Mamet, who wrote Primitive Man for the criminally forgotten Ruby Blue album Down From Above, Nick Hornby, whose collaboration with Ben Folds produced a couple of genuinely good ditties, and Kazuo Ishiguro, whose creative partnership with Stacey Kent has thrown up some gems. And while I’m sure, dear reader, you’ll be able to name some I’ve missed, it’s unlikely the list will be terribly long.

So, despite a few exceptions, the strip of no man’s land between the respective domains of authors and lyricists has yielded a very lacklustre harvest. And a songwriter writing an adult genre book - sci-fi, no less? Come on. Don’t be daft. What are the odds that anybody could stick that landing?

Which brings me to Jim Infantino. I’ve been a fan of Jim’s music since someone emailed me the flash video he did for Stress back in 2000 as a way of trying to calm me during a day of coding at a hateful company that was driving me insane. It helped, and I became a die-hard fan of Jim’s Big Ego. The list of his songs that have become staples in my house is very long indeed, and the dropping of a new JBE album has always been a day of great rejoicing. So when I discovered he was writing a book, and publishing it in installments online no less, I was nervous about what he would do when freed from the tyranny of singable rhyme. I mean, look at Morrissey.

(Oh, you already were. Good. Keep eyeballing him. We may be able to prevent any more crimes against literature if we all just keep watching him like a hawk. Don’t blink!)

What a relief, then to find that Jim’s debut novel is as funny, thoughtful, surprising and well crafted as the songs I’ve been enjoying for 18 years. Its focus on community life and social interaction reminded me of the great Kim Stanley Robinson, especially the Three Californias trilogy. The examination of social structures and the tension between dystopian and utopian models brought to mind Iain M Banks’ politically charged Culture novels. Particularly impressive is his exploration of the interface between humanity and technology - it is timely, but nonetheless original enough to stand out in a field currently obsessed with the issue, and that’s no mean feat.

But although Jim’s book reminds me of some true greats, his unique voice shines through in the telling, making it far more than a collection of assembled themes and textures from other works. This delightful book is the creation of a huge talent and an important new voice in sci-fi. And there are sentences in here that made me grimace with envy, wishing I had written them.

I’m jealous that you have this terrific book ahead of you.

And while you read Jim’s annoyingly accomplished book, I shall be over here with my fellow sci-fi writers starting a petition to prevent songwriters writing novels. There need to be strict lines of demarcation, so they can’t cross the border and come over here to steal our jobs. People like Jim, who dare have more than one talent, need to be stopped. It’s just not fair.