The World of Particulars 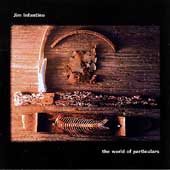 Jim Infantino, and his band Jim's Big Ego, have yet to release an album that I haven't enjoyed. Jim Infantino's poetic talent and his acoustic guitar make for an excellent folk sound.Definitely worth listening to." - A Music Fan on Amazon.com

This was Jim's earliest Boston Cassette - which was rerelased on Gadfly Records - with the injection of the live solo version of the song "Stress" (perhaps the 1st live performance of this song) and the deletion of the song "Rita". It features guest performances from Vance Gilbert, Monk Wilson & a very new-to-the-scene Dar Williams.