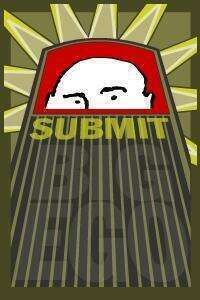 In an attempt to run their band in a more American and patriotic fashion, Jim's Big Ego will be requiring anyone who seeks entrance to their shows to sign a lifetime oath of loyalty to the band. A notary public will be on hand at the entrance to all of their clubs with a retinal scanner, fingerprint kit and a contract to sign. Attendees should bring a current passport, drivers license, birth certificate and if they are a home owner, the deed to their house.

"We were inspired by the Bush Cheney tour," article1 article2 article3 says Jason Schneider, JBE manager & minister of information, "we had to sign a loyalty oath to go see our hero Dick Cheney speak, and we were so impressed by how ingenious it was to insure our support ahead of time, we thought - 'why don't we do that'? Why should JBE have to wonder whether or not they will get a standing ovation? I mean, we work hard to put together a show. We don't need to hear your outburst if it's not 100% on-message."

Part of the loyalty oath will be instructions for dancing. "We want to see our crowd getting down in lock-step" says drummer Dan Cantor, "why take the chance that there might be some interpretive dance? Anyone who does their own thing will be immediately ejected. Also we are working on a line dance complete with kicks and salutes."

"Of course we're also worried about security issues" Jesse Flack, JBE bass player adds "that's why we are instituting a cavity search as well as keeping a level 8 psychic agent to look into the minds of our fans. You can't be too careful. But our biggest concern is that everyone at the show is having a good time. That's why it's required."

Jim Infantino, the reclusive band leader, could not be reached for comment. Rumor has it, he is currently wringing his hands by an enormous fireplace and laughing maniacally.